Delicately salty and creamy with a lingering blue aftertaste.

Perl Las, meaning ‘Blue Pearl’ in Welsh, is a superb blue cheese made by Carwyn Adams and family at Caws Cenarth in Carmarthenshire. This deliciously golden and veiny cheese has become one of the most famous and highly regarded cheeses in Wales over recent years. It is delicately salty and creamy with a lingering blue aftertaste.

Carwyn’s family have been making cheese on their farm, Glyneithinog, in the valley of the river Cych, for six generations. His parents Gwynfor and Thelma started Caws Cenarth in earnest in 1987 in response to milk quotas. Thelma became a key figure in Welsh artisanal cheesemaking, but the reins have now been handed over to Carwyn, who has been responsible for the development of Perl Las as well as Perl Wen and Golden Cenarth.

If you suffer from any allergy or intolerance, please contact our management team by e-mail: hello@filletandbone.co.uk or by phone: 01386 849093 to discuss this before ordering. 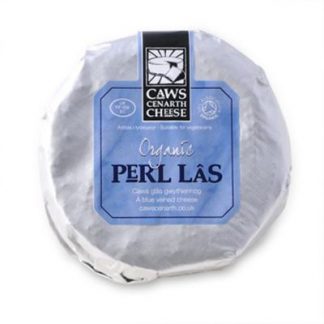